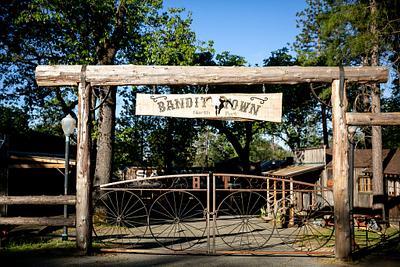 This blog entry is all about wedding flowers. Not just the pretty blooms themselves, but all the planning and decisions and hard work that goes into making those beautiful arrangements that magically appear on the wedding day.

Earlier this year, we photographed Miranda and Peter's flower-filled wedding at Bandit Town.Miranda's brother, Chris, happens to work for a well-known floral design company in San Francisco, Floramor Studios. Chris decided that he would design and create all the flower arrangements and bouquets for the wedding as his gift to the bride and groom. Lucky for us, Chris was willing to write up his personal account of this experience, from early planning conversations to final preparations just minutes before Miranda walked down the aisle. We're pretty excited to have the inside scoop on how exactly the wedding flowers came to be. So instead of us trying to explain it, we're sharing the story from Chris right here! Without further rambling from us, here you go:

"Planning the flowers for my sister's wedding was such a pleasure for me and the least I could do to contribute to her, and my future brother-in-law Peter’s, big day. A few months leading up to the wedding my sister came to visit me in San Francisco and we had an informal chat about some of her ideas about the wedding flowers. She'd wanted to just do something simple for centerpieces like succulent planters that guests could take home after the wedding, but when she was excited to grab some rusty office bin shelves off the street to plant them in, I was a little scared to say the least (nasty rusty shelves off the street?! A street in San Francisco?!!). I had to remind her the filth of that idea and where they'd be placed ultimately (on a table with food!), so in a big brother fashion, I discouraged as best I could :) Gradually the idea evolved into something that seemed totally her style: collections of various sized vases, compotes, cups, and bowls that she had sourced from many a thrift store run. I liked her idea so much and thought the vintage and sort of homespun quality of it would look really nice in the venue's rustic barn. And she even improved on the idea and added her own touch by getting these beautiful cheesecloth runners for the long tables (which she dyed herself!... craftiness runs in the family), so a solid look was unfolding that really complimented the barn of feel.

As the weeks unfolded leading up to the wedding date, she began texting me picture after picture of all these vases she'd been accumulating from thrift store runs. At first it was a few dozen, then a few dozen more, then it grew into over a hundred various sized glass containers for the centerpieces. I started to get a little overwhelmed because while a lot of these cups and vases and containers were smaller, there were so many of them! I knew that the amount of buying I had to do flower wise would be a lot more than anticipated, especially as the wedding was a three and a half hour drive up in the mountains near Yosemite on a warm day. We'd talked out all the other needed, or potentially needed, details like ceremony arrangements, something for the escort card table, cocktail arrangements, and most importantly personal flowers. Back when we were at succulent planters in scary office shelves (she insisted they were ok), she'd wanted the personal flower needs to be barebones; a bridal bouquet and something for the maid-of-honor. I knew that while that'd totally be fine for the feel of it all being pretty laid-back and for our side of the family, Peter's family may want a more traditional approach of boutonnieres, for the groom, fathers, and best-man, and corsages for the moms, so we decided to add all that to the plan.

I asked her to give me an idea of what she liked for flowers and she mentioned anemones, ranunculus, peonies, David Austin roses for starters, maybe pampas grass, and I could supplement with whatever I felt would compliment that and work with the needs of what we'd planned on. She originally planned on sourcing the flowers herself and bringing them to the venue for me to use, but thankfully we decided that I'd do all the buying in San Francisco and drive them up. I couldn't have imagined having her do that as we'd been researching and the flowers she could get in Fresno were way too overpriced and thankfully I have access to a handy wholesale badge at the flower market! The amount of flowers would have been way too much for her and a bride-to-be shouldn't be tasked with that!

A lot of homework was done on my part with me trying to gauge how much I needed to buy, what colors and flowers, cost/budget, and "what was the name of that rose?" and "are these in season then?" etc. which ended up being more than I expected and quite the learning experience for someone who's worked with flowers for almost 12 years. If people only knew the amount of planning needed to execute these things! I'd seen a picture of my sister's wedding dress which was a really beautiful vintage ivory lace dress. The dress, along with some of the colors of the vases she'd purchased and types of flowers she liked, gave me a good starting point for colors: shades of peach, cream, orange, yellow, green, beige, pink, some brighter magentas, some softer vintage blues, and plenty of variety of textures with greenery, grasses, pods, some succulents and filler. Overall I thought more of a garden-like, wildflower look mixed in with plenty of roses. And since we were working with long tables for the reception, there'd be a sort of tablescape of collections of vases running down the table which allowed me to make informal themes and grouping of colors and flowers. The most fun part for me was getting the pampas grass. I'd been told it was not available at the time, but I kept a watchful eye open while cruising around the city on deliveries at work, and spotted a nice big collection of them growing along the side of the road in front of an unused warehouse. Florist foraging at its finest!

So after some early mornings at the market, and a couple days of processing and preparing everything, I loaded up a very full cargo van and made the drive to the venue, Bandit Town! During all my shopping, prepping, and loading, and then unloading, I kept having this fear that I overbought. Did I overspend? Is this too much? The reactions of my future in-laws, and family when they saw the amount of flowers I bought was amazement. I was amazed too. And anxious, until all the vases arrived and little-by-little the small dishwashing portion of the kitchen I was to work in became filled with so many little vases, and cups, and bowls... my anxiety became not that I bought too much, but that I had a lot of work to do! So, I got to work and went from 3:30 -11pm making arrangements of various sizes filling up counter-space and tables... that kitchen exploded with flowers. I did get a little help from my mom prepping some things and making a few arrangements, but given the space, it was easier to just crack at it solo. I really wanted to keep going, but it was lights out at 11pm, so I arranged to arrive the next morning... at 5am. Went back at it and kept going and going up until 4:45 and the ceremony was at 5! I've never put a suit on that quickly in my life. I was frantic, sweating, a little stressed, and my back was killing me, but what made it all worth it was my best memory of the whole experience; after my sister had gone out with Peter for photos before the ceremony, she peeked in the barn where the reception was to be held and saw all those long long tables just filled with arrangements. She came into the kitchen with tears in her eyes and couldn't believe it. She was so happy and gave me a hug. I knew then that I did my job, stress and all, and it came out great, but most importantly gave my sister something special for her wedding and a great memory for both of us."

Thanks so much for sharing ALL this information Chris. You did an amazing job and the wedding was truly beautiful. xoxo 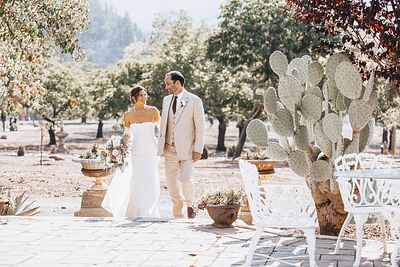 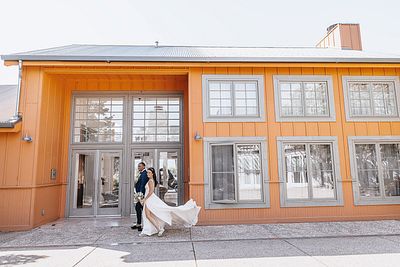 LUXURIOUS WEDDING AT CARNEROS RESORT AND SPA IN NAPA 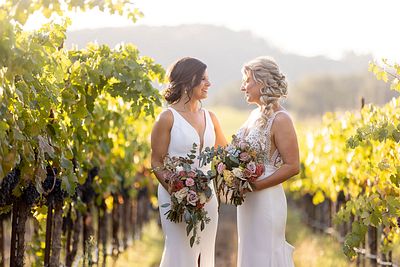 LUXURIOUS WEDDING AT CARNEROS RESORT AND SPA IN NAPA

Jessica and Abby | Love is Love at Beltane Ranch, Sonoma